Reg. No (National Drug Org.): 2820005577769
WHAT IS 'ARTCURE' WHAT IS HERNIA APPLICATION MECHANISM OF ACTION THE EFFECT Of 'ARTCURE' M.R.I. EXAM DEMONSTRATION NOTES
What is 'ARTCURE'

'ARTCURE' is a natural way of efficiently curing any disc hernia, without the use of drugs. Combination of the words ‘ART’ and ‘CURE’.

The method was invented by a Physician (Neurosurgeon) and it is patented in U.S.A.

The product is a patch inside of which the applying Physician inserts the contents of two (-2-) dispensers. The contents is a mixture of six (-6-) different Natural Herbs: Oleum limonis, Oleum thymi, Oleum nigra, Oleum rosmarini, Oleum chamomilla, Oleum lauri expressum and special carriers.

The patch with the content inside, is placed on the patient’s back in the Herniated area and is covered fully by the five (-5-) hypoallergenic adhesive bands included in the package. 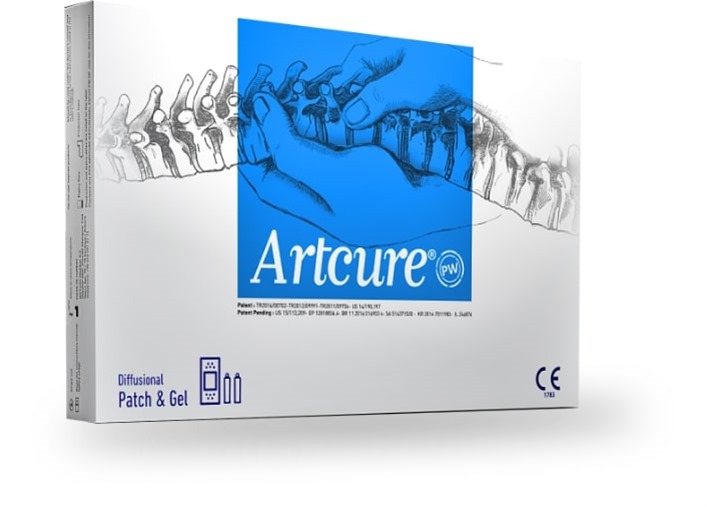 What is a hernia 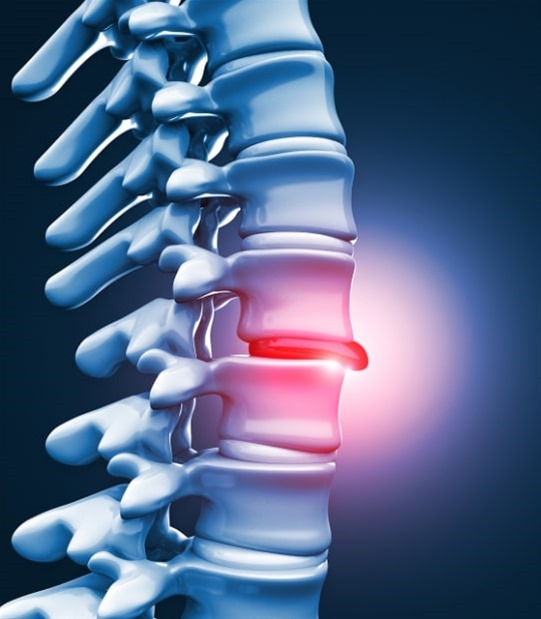 Disc hernia is a health problem faced by a major part of the general population. Among the patients are men and women, young and old, short and tall, fit and not fit, etc

Shortly and highly simplified, hernias are developed as follows:

There are 33 vertebrae in an adult spine and between each vertebra, a structure called discus intervertebralis serves as a cushion. Inside of this structure is called nucleus pulposus which is a gelatinous form consisting of approximately 80% water. The cushion is wrapped by a solid structure with good elasticity which is called annulus fibrosus. Disc hernia occurs when the solid ring wrapped around the disc is ruptured and the gel-like portion to bulge out beyond the damaged outer ring. If such bulged portion causes pressure on spinal nerves, the resulting clinical condition is called spinal disc herniation. If such condition occurs in cervical disc, it is called cervical disc herniation; similarly, if it affects the lumbar area, it is referred to as lumbar herniation.

The pain and discomfort caused by a cervical disc hernia or lumbar hernia, is fought with the use of pain killers, long stays in bed, Physiotherapies, acupuncture, minimal invasive operations and finally full surgical operation.

Hernias may cause serious troubles in a patient’s every day activities, timely ranging from a week long up to a month and in some cases longer.

Also, reoccurrence frequency is high, as the same hernia re-appears as well as new ones are usually developed in other areas of the spine. In some cases ( quite frequently), patients have 3 even 4 different hernias. In more serious hernia developments, the patient risks permanent disability thus is urgently moved to the Operating Theatre. 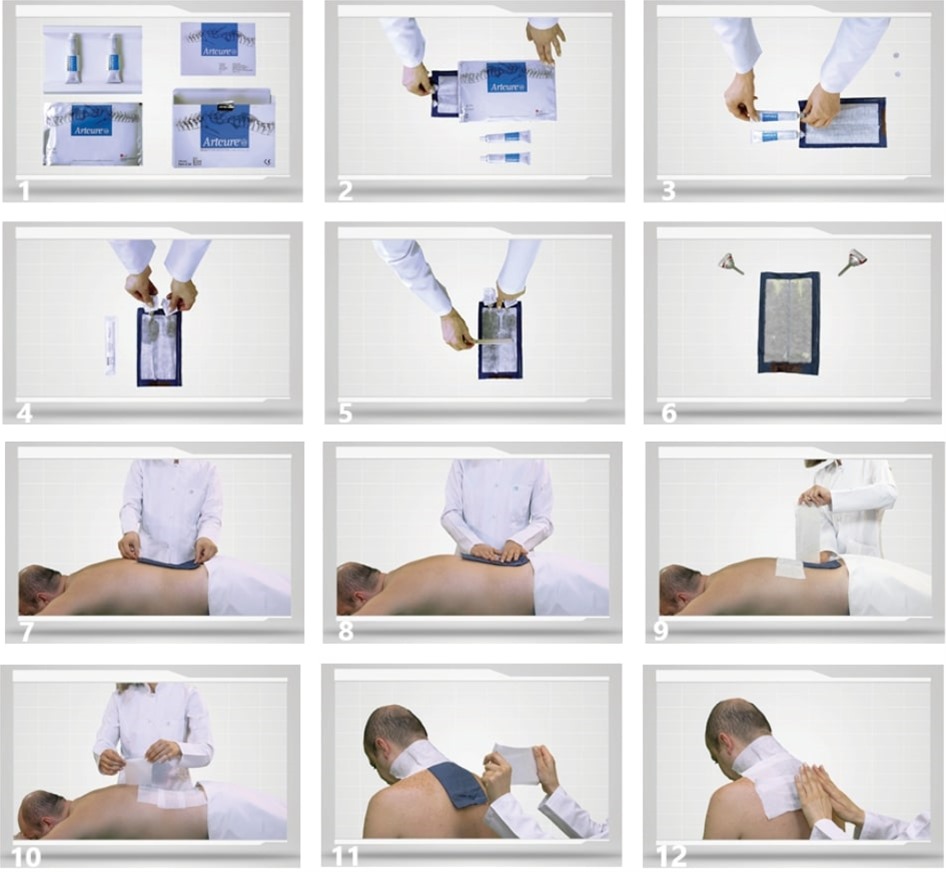 After placing the patch on the patient's back in the area of the herniated spine, the patient remains in bed for 24 hours (nourishment and physical needs exempted), preferably in supine position (with a narrow pillow under the head), but not necessarily exclusively.

Within 24 hours after the application, 'ARTCURE' produces the desired results. 'ARTCURE's'  immediate result, is the complete elimination of the pain and/or leg numbness . This is achieved as follows:

After the application, the elements inserted into the patch pass transdermally and reach (not through the blood vessels) the herniated section. As mentioned above, the content of the nucleus pulposus (herniated disc) consists of 80% - 85% of water. With the help of osmotic process, the elements contained in the patch (herbal oils), remove the water contained in the herniated nucleus pulposus (hernia dehydration).

The end result is the immediate big shrinkage of the herniated nucleus pulposus - due to dehydration. Therefore, the pressure exerted on the nerve root is released and the pain is eliminated.

'ARTCURE's' herbs penetrate through the rupture in the Fibrous Ring, from which part of the fibrous nucleus emerges. Therefore 'ARTCURE' shall not penetrate a  healthy disc with an intact outer ring.

It should be noted that 'ARTCURE's' curing effect lasts for the next …  4 months after its application !! Evident results though, appear in the first 1-3 days depending on the nature of the hernia, the patient’s age and organism.

'ARTCURE' is not a medicine. It is an effective and painless solution before the minimally invasive or surgical operations.

The Effect of 'ARTCURE' (A demonstration - Time lapse effect) 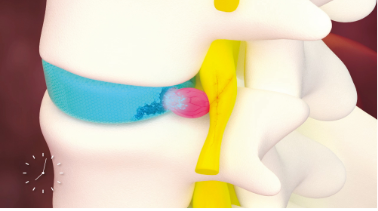 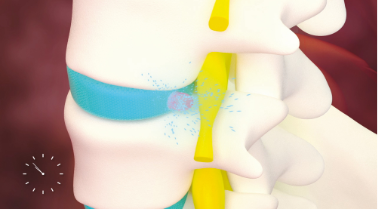 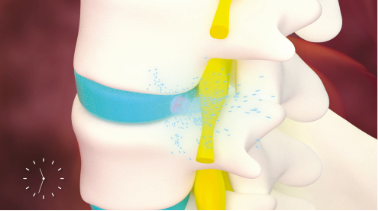 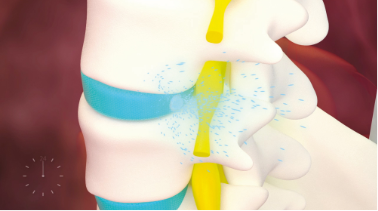 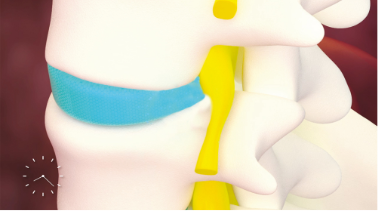 BEFORE AFTER
Notes
Exclusive Distributors for Greece & Cyprus